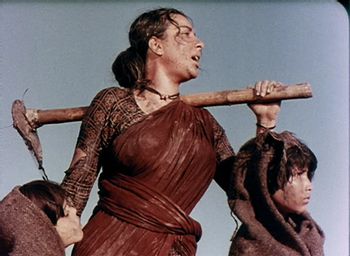 Radha (Nargis) and Shamu (Raaj Kumar) are newlywed farmers who unknowingly sign onto a lifetime of poverty and desperation when they get a loan from Sukhilala (Kanhaiyalal) to pay their wedding expenses. Sukhilala soon charges exorbitant interest rates which Shamu and Radha struggle to pay, under the increasing burden of four children. In an attempt to earn more money Radha and Shamu attempt to cultivate more of their land, only for Shamu to lose his arms in a farming accident. He disappears out of shame, abandoning Radha and her children.

Radha struggles on, losing her crop and two children to a flood. In a moment of desperation she flees to Sukhilala's house to beg for money, only to reject him at the last moment. Soon her two surviving children grow up. Her older son Ramu (Rajendra Kumar) soon gets embroiled in his own cycle of poverty. Her second and favorite son Birju (Dutt) resents Sukhilala and takes out his rage by harassing Sukhilala's daughter. This taunting turns serious when he tries to kill Sukhilala, becomes a dacoit, and vowes to kidnap Sukhilala's daughter. Radha must now decide if she wants to stand against her favorite son.