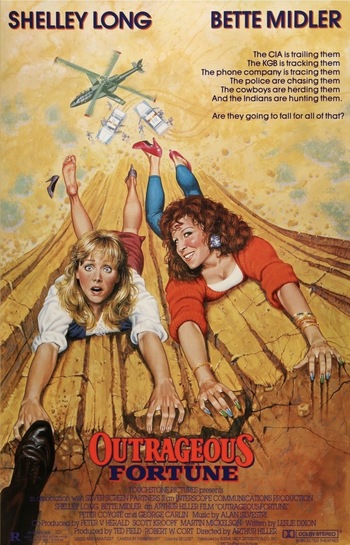 Lauren Ames (Long) is an aspiring actress whose ambition far outweighs her success, despite her many years of taking classes; Sandy Brozinsky (Midler) is a fast-talking, foul-mouthed waitress from the wrong side of the tracks who horns her way into Lauren's exclusive drama class on a lark. Unbeknown to one another, Sandy and Lauren are both seeing the same impossibly perfect man, Michael Santers (Peter Coyote). When Michael inexplicably fakes his own death, Sandy and Lauren wind up joining forces to track him down. A wacky, cross-country caper ensues, and both women discover that there's a lot more to the man they love—not to mention their suspiciously homicidal Russian acting coach, Korzenowski (Robert Prosky)—than they ever imagined.

Released in early 1987, the film's modest success (it grossed about double its budget) probably seemed to justify to Long her decision to leave the cast of Cheers to pursue a full-time film career.note She officially declined to negotiate to renew her contract on December 15, 1986; her departure from the show aired as the fifth season finale on May 7, 1987. However, it would be followed by a number of high-profile flops (starting with Hello Again, released later that year) and Long wouldn't see box office success again until the ensemble film The Brady Bunch Movie (she was billed second, behind Gary Cole) in 1995.