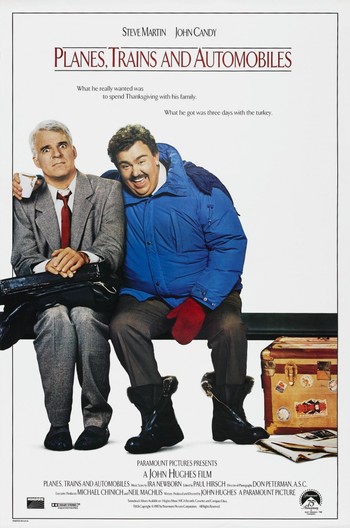 "You're messing with the wrong guy!"
— Neal Page
Advertisement:

This 1987 film stars Steve Martin and John Candy in two of the best comedy performances of The '80s. It was written and directed by John Hughes, who was best known for his teen angst films up until that time, and is regarded by many as his magnum opus. Both Martin and Candy called it their favorite among their own films.

Uptight marketing executive Neal Page (Martin) just wants to get home to Chicago for Thanksgiving Day. Unfortunately, every mode of transportation somehow fails him and he is stuck with Del Griffith (Candy), a garrulous traveling shower curtain ring salesman who doesn't quite know when to shut up. Over the course of three days—through delayed planes, broken-down trains, and burned-out automobiles, among other mishaps—Neal and Del progress from being at each other's throats to developing an unlikely friendship.

The film is probably best known for the sole scene responsible for its R rating; in which Neal, after being abandoned in a rental car parking lot where the car he rented isn't there, is forced to walk three miles back to the airport, whereupon he goes on a tirade against the rental agent. But it isn't so much said tirade, as the rental agent's response. Roger Ebert (who considered this one of his all-time favorite films and watched it every Thanksgiving) probably puts it best:

"The other great comic set piece in the movie is responsible for its R rating; nothing else in the movie would qualify for other than PG-13. This is Neal's verbal symphony for the f-word, performed by the desperate man after a rental-car bus strands him three miles from the terminal without a car. He has to walk back through the snow and mud, crossing runways, falling down embankments, until he finally faces a chirpy rental agent (Edie McClurg) who is chatting on the phone about the need for tiny marshmallows in the ambrosia. When she sweetly asks Neal if he is disturbed, he unleashes a speech in which the adjectival form of the f-word supplies the prelude to every noun, including itself, and is additionally used as punctuation. When he finishes, the clerk has a two-word answer that supplies one of the great moments in movie dialogue."
Advertisement:

Del gives Neil a piece of his mind and how much he has accepted being himself.

Example of:
I Am What I Am

Del gives Neil a piece of his mind and how much he has accepted being himself.