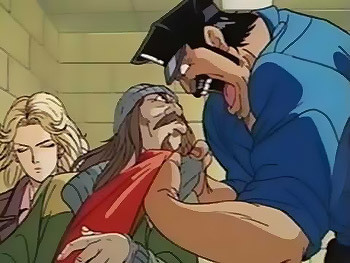 I don't have the foggiest where my partner went, but I've got a breath mint you may be interested in.
FBI Agent Norman Jayden: Blake, you are an unbalanced, psychopathic asshole!
Lieutenant Carter Blake: I'll take that as a compliment.
— Heavy Rain

The room is small. Help is far away, on the other side of many locked doors. Your arm is chained to the table and a Rabid Cop is spraying spittle into your face in a way that convinces you that he has completely lost his mind.

All he wants you to do is admit that everything Adolf Hitler did was your idea. Sounds good to you. What do you have to sign to get away from this maniac?

The Rabid Cop might be casually dirty, or overbearingly self-righteous, or anywhere in between, but they all have two things in common: a reckless disregard for civil rights, and an unwavering conviction that any person they've identified as "the perp" really is a perp (regardless of any contradicting evidence) and deserves to suffer. In a Good Cop/Bad Cop routine, they usually take the "Bad Cop" ball and run clear out of the stadium with it. Likely to enjoy using Torture for Fun and Information.

Compare/contrast the (presumed) sympathetic Cowboy Cop. See Police Brutality and The Bad Guys Are Cops for when this guy goes too far. Killer Cop is when they skip the violence and go to straight-up murder.