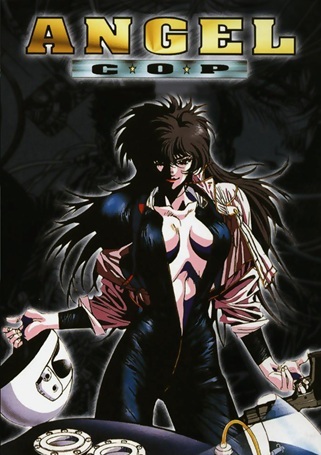 Angel Cop is a six-part original video animation directed by Ichiro Itano, but due to the content of the anime, it's usually considered that the driving force of the anime is actually the writer Sho Aikawa. A manga adaptation written and illustrated by Taku Kitazaki was serialized in Newtype Magazine and reprinted as a Newtype 100% collection in 1990.

20 Minutes into the Future, Japan's economy is so strong that it's linked to the global economy. This angers a communist terrorist group called "The Red May," who decides that the best way to make the world a more equitable place is to blow up as much Japanese infrastructure as possible. To combat these terrorists, a bunch of elite law enforcement officials licensed to kill are assembled. They include the titular "Angel," a buff dude called Raiden, a couple of other token stereotypes, and Da Chief, Kaishō Taki. Together, they fight against Tachihara, the new leader of the Red May who took over from his boss and aims to accomplish the organization’s goals.

Things take a turn for the bizarre when Raiden goes missing after one encounter with the terrorists, and then the terrorists themselves get attacked by three powerful psychics called "Hunters", Asura, Freya, and Lucifer.

Or, to put it simply: Jewish bankers (Americans in the dub) plot to turn Japan into a nuclear waste dump.

The real reason to watch this anime is for the gunplay, the cars, the gruesome kills, the awesomely-animated displays of telekinetic power being thrown about by the Hunters, and the hilarious profanity in the English dub.