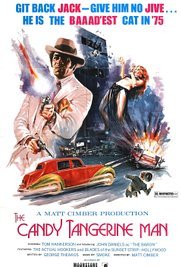 "Git back, Jack! Give him no jive! He's the BAAADEST cat in '75."
— Tagline
Advertisement:

The Candy Tangerine Man is a 1975 Blaxploitation film.

Roy Lewis masquerades as a mild-mannered businessman, but is really a pimp known as "the Black Baron." His pimping business is very lucrative, but he has to deal with the Mob wanting to put him out of business.