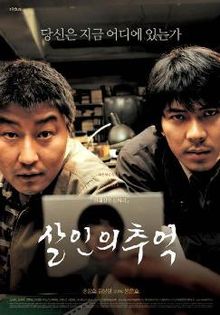 Memories of Murder is a 2003 South Korean drama co-written and directed by Bong Joon-ho, based on the then-unsolved serial murders that took place in Hwaseong

The film follows police detectives Park Doo-Man (Song Kang-Ho), a native of the small provincial town where the murders take place, and Seo Tae-Yoon (Kim Sang-kyung), a young detective from Seoul, in their investigation to track down and apprehend the killer. The case is far from simple, as multiple levels of incompetence conspire to obscure the truth, and as the bodies pile up, the resolve of all the officers becomes frayed. As a work Based on a True Story, much of the plot is a Foregone Conclusion, but the work nevertheless contains a number of twists, so beware unmarked spoilers.