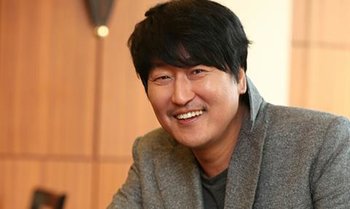 Song Kang-ho (b. January 17, 1967 in Busan, South Korea) is a versatile and prolific South Korean actor. He found recognition by getting cast in two Park Chan Wook films, JSA: Joint Security Area and Sympathy for Mr. Vengeance, before rising to even greater fame by starring in Bong Joon-ho's Memories of Murder. Since then he has been recognised as one of the greatest actors in Korea, and is a favourite actor of Bong, having subsequently starred in The Host (2006), Snowpiercer, and Parasite (2019). The latter was the first ever South Korean movie to win any Oscar awards, let alone the award for Best Picture in general.
Advertisement:

He's been cast as the leading man in some of the most celebrated and recognized movies in South Korea, and is one of the highest-profile actors in the ROK film industry.

He never had any formal training, only in social theatre groups.