Saw It in a Movie Once 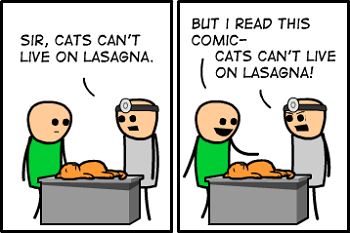 A group of characters is in some sort of fix or trouble. One character steps up and:

The other people in the scenario, Mooks, Damsel in Distress, and even the villain are impressed by this display of incredible competence and showmanship.

The character who just amazed the crowd shrugs it off modestly, saying simply, "Saw it in a movie once."

Sister trope to both Taught by Television, You Watch Too Much X, and I Know Mortal Kombat. See also Crouching Moron, Hidden Badass.

Carl utilizes some dramatic acting he saw from a soap opera once.

Carl utilizes some dramatic acting he saw from a soap opera once.