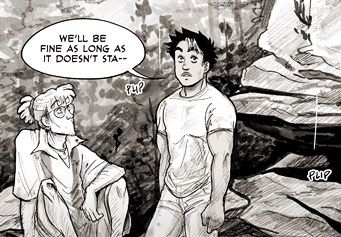 Nature does, in fact, hate them both.

"A hundred miles later
My feet were so sore!
THEN, wouldn't you know it!
It started to pour!"
— I Had Trouble in Getting to Solla Sollew
Advertisement:

You've heard the expression "It never rains but it pours"? Well, this is the literal application of that.

One standard way for showing that things are going From Bad to Worse is rain. When things are looking real bad for a character, the story will add insult to injury with a perfectly-timed downpour.

Rock Bottom often precedes this trope. While this trope can easily occur with no spoken dialogue at all, if a character is foolish enough to actually say "At least it can't get any worse," or, even more dangerous, "At least it's not raining"... BOOM! It'll start raining immediately and heavily.

This is a type of Empathic Environment—the dark and gloomy rainclouds are great for symbolically mirroring the character's hopelessness and despair; see Gray Rain of Depression, a supertrope. It's almost always Hostile Weather as well.

Subtrope of From Bad to Worse, and frequently follows Rock Bottom. The inverse is Cue the Sun, where the dark skies clear up when things start to get better. Compare Cue the Falling Object, which is similar except used more for comedy purposes. Contrast Happy Rain and Redemption in the Rain.

Snow, hail, and other forms of precipitation count too, but rain is much more common.

"You Can Never Predict Them"

Be careful what you say, Edd.

Alternative Title(s): At Least Its Not Raining, At Least It Isnt Raining

"You Can Never Predict Them"

Be careful what you say, Edd.