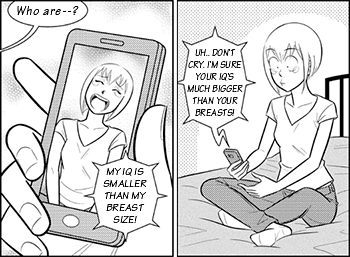 You're not helping, Gary.
Bolt: Calm down, cat. You're with me.
Mittens: That's the problem!
— Bolt

The opposite of Threat Backfire, this is for characters saying things that are meant to sound assuring, but to those hearing it, it feels like things could backfire and take a turn for the worse instead of getting better.

Can be related to Bad Omen Anecdote. (If, for example, one uses as an assuring analogy something that actually ended horribly.) Often related to Analogy Backfire.

Compare/Contrast with False Reassurance, wherein the person doing the reassuring is deliberately misleading.