Manga / I Belong to the Baddest Girl at School 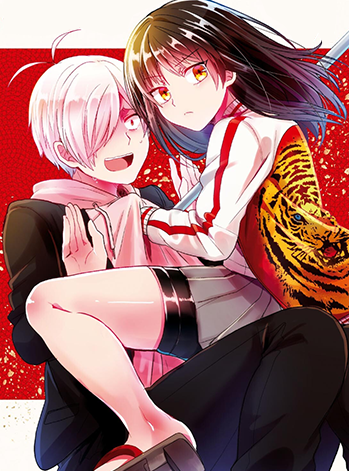 A scary delinquent assaulting a terrified victim, or a lovestruck girl having an intimate moment with her boyfriend? It's hard to say for sure...
Advertisement:

Fuyuhiko Unoki has never been a stranger to bullying. He's had trouble standing up for himself ever since elementary school, and his classmates have always been happy to walk all over him. Yet none of that could have prepared him for the day Kanade Toramaru, the most dangerous delinquent at his high school, approached him with a demand: "Be mine." While he certainly doesn't want to be her personal slave, it's not like he has much choice in the matter, so he's resigned himself to doing what he can to satisfy her while taking care not to upset her and risk invoking her wrath.

Except... that's not quite the whole truth. Kanade was actually trying to ask him out, having fallen hopelessly in love with him, and due to the way he's been attending to her every need since then, she's convinced it must have worked and that Fuyuhiko is now her boyfriend. From here, she'd love nothing more than for the two of them to grow even closer and do all the romantic things that couples usually do. Unfortunately, thanks to her inability to express her feelings clearly, along with Fuyuhiko's tendency to assume the worst whenever he's dealing with her, that's easier said than done...

I Belong to the Baddest Girl at School (or Pashiri na Boku to Koisuru Banchou-san in the original Japanese, often shortened to "PashiKoi") is a Romantic Comedy manga by Kashima Ui that ran from December 2017 to January 2021 in the online magazine Young Ace UP, and follows the two as they stumble their way through a relationship built on a huge misunderstanding, while developing a genuine bond in spite of it all.

In August of 2021, the publisher began uploading dubbed chapters of the manga

to their YouTube channel, with Masayuki Suzuki and Yuka Iwahashi providing the voices for Fuyuhiko and Kanade respectively. That same month, the series would also recieve an official English translation courtesy of One Peace Books.