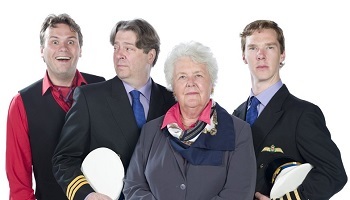 Arthur, Douglas, Carolyn, and Martin
"Welcome to MJN Air — putting the excitement back into air travel. Sometimes too much so."
—Douglas Richardson
Advertisement:

Cabin Pressure is a 2008 BBC 4 radio sitcom, written by John Finnemore, about a small charter airline – or, technically, an 'airdot', as you can't put only one aircraft in a line.

There are two pilots: First Officer Douglas Richardson (Roger Allam), the good one, and Captain Martin Crieff (Benedict Cumberbatch), the safe one. The attendants are Carolyn Knapp-Shappey (Stephanie Cole), who owns the airline as part of her last divorce settlement, and her well-meaning, if dim, late-twenties son Arthur (John Finnemore).

Much of the humour comes from the tension between the two pilots, Carolyn's penny-pinching ways, and Arthur's stupidity.

The series was completed after 26 alphabetically-entitled episodes: four series of six, one Christmas Special, and a two-part finale that was broadcast on Christmas 2014. Since the series ended Finnemore has revisited the character of Arthur on several occasions, most recently for a video spin-off, "Cabin Fever"

, about Arthur in self-isolation.