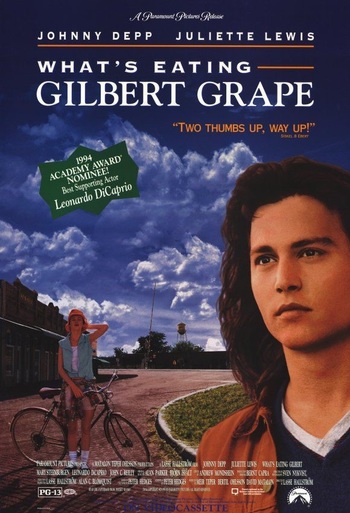 "Life is a terrible thing to sleep through."
— Tagline
Advertisement:

What's Eating Gilbert Grape is a 1993 drama written by Peter Hedges, based on his novel of the same name, and directed by Lasse Hallström. It stars Johnny Depp as the eponymous Gilbert Grape, with Juliette Lewis and Leonardo DiCaprio. The story deals with the Grape household and their friends and acquaintances from Endora, Iowa. Picking up a few years after the suicide of Gilbert's father, we see its impact on everyone involved.

One of the main difficulties the family is having concerns Arnie Grape (DiCaprio), who is developmentally disabled; this creates a great many problems for everyone involved, especially the multiple times he climbs the town water tower and refuses to come down for anyone except his brother Gilbert.

Gilbert ends up chafing against his role as the new man of the house, along with having to find his way through some romantic tensions between a married woman (Mary Steenburgen) and a frequent traveler who just arrived in town (Lewis), the preparations for a grand party for Arnie's 18th birthday, his morbidly obese mother's declining health, and his ambition for a career and a future.