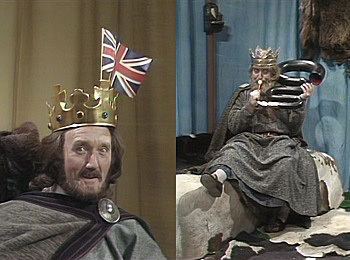 Carry on Laughing! is a British TV comedy series released in 1975, which was intended to bring the Carry On franchise to the small screen at a time when the films were declining in popularity. Several long-time Carry On regulars appear, alongside team members who joined later in the film series' run (and who are given more prominent roles here). Notable absences are Kenneth Williams, who declined to appear, and Charles Hawtrey, who had been dropped from the team after Carry On Abroad due to a dispute about billing order.

As with some of the "Carry On" films, the episodes are parodies of other films, TV shows, books or periods of British history, with episodes inheriting many tropes from their source material. The format falls mid-way between a series and an anthology - while the stories and settings from each episode are generally unrelated, the same setting is sometimes used for two or three non-consecutive episodes.

Not to be confused with the stage play of the same name.

Carry on Laughing! provides examples of: