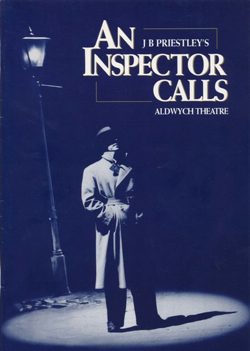 "Public men, Mr. Birling, have responsibilities as well as privileges."
"One Eva Smith has gone - but there are millions and millions and million of Eva Smiths and John Smiths still left with us, with their lives, their hopes and fears, their suffering and chance of happiness, all intertwined with our lives, and what we think and say and do. We don't live alone. We are members of one body. We are responsible for each other."
— Inspector Goole
Advertisement:

An Inspector Calls is a British play by J. B. Priestley that was first performed in 1945. It’s often called one of Priestley’s best works – if not, the best play he’s made – possibly because it comments on (as well as references) social issues that are still alive in Britain today. Maybe that’s why it’s a set text in many schools in Britain – usually for the GCSEs in England and Wales - so expect a large dose of Everyone Is Jesus in Purgatory.

Set in the year 1912, the play follows the story of a middle-class family called the Birlings, who are celebrating the engagement of daughter Sheila to a much-older upper-class Gerald Croft, secretly hoping that the marriage will make them even richer. The party is then interrupted by a man identifying himself as Inspector Goole, a local police detective who is investigating the suicide of a young working-class woman named Eva Smith. Each of the guests at the dinner-table are questioned, despite some protests of annoyance, but the family soon find out that they all have had dealings with the woman, and learn that there's more to their seemingly-perfect world than they previously believed.

It was adapted into a film in 1954 directed by Guy Hamilton and starring Alastair Sim as Inspector Goole. The BBC adapted it in 2015 starring David Thewlis, with Miranda Richardson as Sybill Birling.