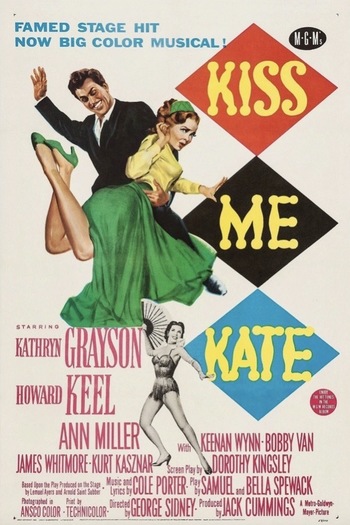 A 1948 musical with music and lyrics by Cole Porter and book by Sam and Bella Spewack, Kiss Me, Kate was an answer to Oklahoma! in that the music advanced the plot. It also won the first Tony Award for Best Musical (along with four other Tonys).

It's Baltimore, post-World War II. High-minded actor Fred Graham is trying out his musical version of Shakespeare's The Taming of the Shrew, starring as Petruchio opposite his ex-wife Lilli Vanessi in the title role ("Another Op'nin', Another Show"). Fellow actress Lois Lane (Bianca) laments the behavior of chronic gambler Bill Calhoun (Lucentio), as Bill has signed Fred's name to a large gambling debt ("Why Can't You Behave?"). Fred and Lilli reminisce about old times ("Wunderbar"), but soon start to argue. Lilli realizes she still loves Fred ("So in Love"), and when a bouquet of flowers from Fred (actually intended for Lois) arrives in her dressing room, she rejoices even more. The show opens with Fred, Lilli, Bill, and Lois onstage ("We Open in Venice"), and continues with numbers by Lois and Bill ("Tom, Dick, or Harry"), Fred ("I've Come to Wive it Wealthily in Padua") and Lilli ("I Hate Men"). But things start to go awry when Lilli reads the note included with the bouquet, acting out onstage and forcing Fred to take matters into his own hands. By spanking her in front of the audience.

Meanwhile, backstage, Fred is approached by two thugs who come to collect the IOU Bill signed Fred's name to. To stop Lilli from quitting the show, Fred tells the two men he can only pay their boss the money with the profits from the night's performance. In between his scenes ("Were Thine That Special Face"), Fred convinces the Two Men to do a little convincing of their own. The gangsters "cajole" Lilli into staying on the show ("Cantiamo d'Amore", "Kiss Me, Kate").

During the Intermission, Fred's dresser Paul and the rest of the ensemble cast complain about the weather ("Too Darn Hot"). Lilli calls her boyfriend, General Harrison Howell, to complain about Fred's treatment of her, and the General immediately drives down to rescue her while the show goes on ("Where Is the Life that Late I Led?").

General Howell arrives to take Lilli away ("From This Moment On"). The Two Men find out their boss has been killed, so without an IOU to collect, they try to make their way out of the theater. Lois reassures Bill she has eyes only for him... sort of ("Always True to You in My Fashion") and Bill admits he couldn't leave her ("Bianca"). Fred desperately tries to get Lilli to perform the rest of the show, realizing he still loves her too ("So in Love (Reprise)"). Lilli leaves with Howell. The Two Men get stuck out on stage and improvise ("Brush Up Your Shakespeare"). Fred resigns himself to finish the last scene of the show, not expecting 'Kate' to come onstage. He is surprised but overjoyed when she does; Lilli came back ("I Am Ashamed that Women are so Simple") ("Kiss Me, Kate (Reprise)").

Its best known song is "Brush Up Your Shakespeare". "Another Op'nin', Another Show" is also widely recognized.

A 3-D Movie version was released in 1953, directed by George Sidney and starring Kathryn Grayson as Lilli, Howard Keel as Fred, and Ann Miller as Lois.