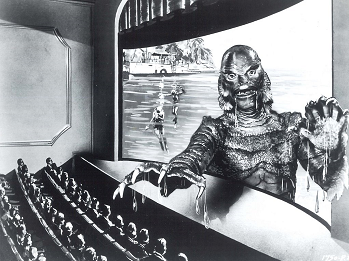 The wave of the future! Color? Pfft. It'll never catch on.
"IT'S LIKE I CAN TOUCH YOU!"
— Don Hertzfeldt, host of The Animation Show, after trying on 3D glasses for the first time

3D film is way Older Than They Think. Stereoscopy itself (the art of tricking our brains to create an illusion of depths) was invented back in 1838, and attempts at applying this technology to films were made as early as the 1890s. However, 3D films were little more than novelty, and failed to catch much interest.

3D movies first became a fad for a few short years in the 1950s; they were expensive to show and required special equipment that was often not used correctly. A second 3D movie fad began in the early 1980s with the low budget Western Comin' At Ya!; this was when film franchises started releasing their third movies in 3D, and television station would even occasionally show 1950s 3D movies using red/blue glasses.

After trickling out around 1984 or so, 3D movies came around again in the 2000s, creating the third 3D movie fad. Advances in computer technology made it much easier to create 3D movies in general, and especially in computer animation. This is also after IMAX had spread. People have noted modern 3D has worked best with animation with animated feature films being the most highly praised 3D productions to date such as How to Train Your Dragon (98% on Rotten Tomatoes) and Toy Story 3 (99%). However, the increased costs to produce 3D movies, coupled with the recent decline in attendence of 3D movies, has caused some speculators to express concern over the longevity of the format

. The failure to get 3D television sets

into homes also does not bode well for the format. However, with major 3D productions still being released and scheduled a decade after the beginning of the latest fad, even if limited mainly to IMAX and other high-end chains, others are seeing this as 3D getting its foot in the door, and that the technology will have peaks and troughs in popularity until some film comes along and does for it what The Wizard of Oz did for color.

3D Movies have their own variation of Shoot the Money where things will jut out towards the audience a lot more frequently than would occur in a 2D movie. See Paddleball Shot for examples.

Thanks to the proliferation of 3D movies, studios naturally have jumped at the chance to get more money out of their audiences by converting movies into 3D which were shot "flat" (with only one camera). However, this often turns out imperfectly, due to having to squeeze a lot of intricate post-production work (imagine having to cut out a piece of an image in Photoshop, then adjust it to move twenty-four times a second—now imagine doing it for multiple layers of an image, for the entire length of a feature film) into the short period before a fast approaching release date. Critics such as Roger Ebert, already pretty biased against 3D, are even more venomous towards fake 3D, with some contemptuously defining it as "2.5D" (not to be confused with the video game trope).

It has been noted by several of these critics that, like the other big periods of 3D movies in the 1950s and 1980s, the recent boom of 3D releases comes when Hollywood's profit margins are significantly under threat by an outside force (television in the first case, home recording and VHS in the second, downloading and DVD today) with the consequence that studios are desperately looking for any old gimmick that will get people into movie seats. There has also been some recent concern

about 3D movies wreaking havoc with the focus and convergence of people's vision. Another issue has been a few theaters being too lazy to change out the 3D lens of their projectors when they put on a 2D movie instead, leaving those patrons stuck with a very dim image on the screen to watch. 3D movies' popularity began to noticeably wane towards the end of the New 10s as audiences began tiring of the effect and began deriding 3D as a gimmick to gouge audience wallets and many theater chains simply stopped showing 3D versions of movies and exclusively screened 2D versions instead.

See Three-Dimensional Episode for non-3D series with episodes in 3D. (Which can overlap with 3D movies if it's a series of movies.)

See also 3D Comic Book, the print version of this.

Movies filmed in 2D and converted to 3D (incomplete)

References to 3D movies in media:

Video Games
Some games include support for stereo rendering of the graphics. Granted, it could just be the developers showing off considering that the theoretical basis for it is pretty simple.