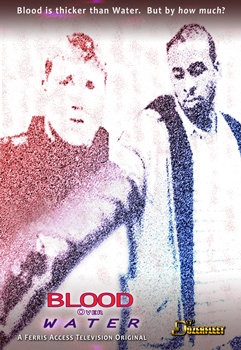 Totally not trying to be Scarface. Now comes in 3D.
Blood Over Water is the brainchild of six TV practicum class students that began life as a drama project.
Advertisement:

The plot is essentially this: A mob boss named Clyde Spendelworth moves into town, and takes control of the local Sleet Mountain water bottling factory, and nobody seems to notice at first. Clyde immediately hires George Lawence and Kyle Tugrass to be his enforcers at the factory, and blackmails Chris Kennal into working for the conspiracy. Chris is friends with twin brothers Mark and Aaron Stefflin, and Mark works with Chris at the factory. However, Clyde grows over confident when he assumes Mark will be as corruptible as Chris. But Mark isn't interested in Clyde's games, especially when he takes issue with pollution and cleanup fraud. Mark steals a "Confidential" folder, then waits for the perfect opportunity to rat out his employer to the EPA.

Alas, Mark soon goes missing. He alerts his brother Aaron that he intends to go on a fishing trip with him. But when Aaron gets no response, he goes over to Mark's house to investigate. He finds it in ruins. Strange men begin chasing him around, and it grows difficult to tell friend from foe. Chris soon finds that Aaron - and other innocents - are being caught in the web of deceit and murder that Clyde has enacted to keep his cleanup fraud scheme from becoming the town's biggest scandal in years. But as more innocents get entangled and the body count starts piling up, Chris realizes he faces a difficult choice: Will he betray his company, or betray his friends? Or both? They say Blood is Thicker Than Water...But by how much? Also, Blood has been shed over water.

Considerations are being made for a Continuity Reboot / Remake, which would expand on each of the main characters' roles and make the story take place over a longer time period. It would also allow for more characters to be introduced, making the arbitrary designation of "blood" and "water" factions more interesting.

It should not be confused with the similarly-named book by David and James Livingston, nor the film based on it. More information about the mini-series can be viewed here

. Information about the upcoming novel remake is here

. A compilation of the five-part mini-series into a single film can be viewed here

. The blooper reel can be viewed here

Tropes in Blood Over Water include: