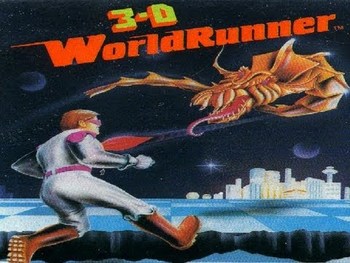 The 3-D Battles of WorldRunner (or 3-D WorldRunner, to use its Officially Shortened Title) is a 1987 video game created by Square for the Nintendo Entertainment System. In Japan (where it was titled Tobidase Daisakusen), it was one of a number of games Square published for the Famicom under the DOG label. It was the first Square game released internationally: Acclaim published it in the United States. Developed by the same team subsequently responsible for Rad Racer and Final Fantasy, 3-D WorldRunner was a Space Harrier-like game designed to be played with red/blue 3-D glasses.

The object of the game is to liberate the eight worlds of Solar System #517 from the invading Alien Serpentbeasts. These fantastic worlds are filled with checkerboard floors, bottomless canyons, ancient columns and (of course) various colorful evil minions. Gameplay consists of running towards the horizon, making well-timed jumps and shooting missiles at enemies. Its hero, named Jack, later made a cameo appearance in the PlayStation game Chocobo Racing as an unlockable racer.