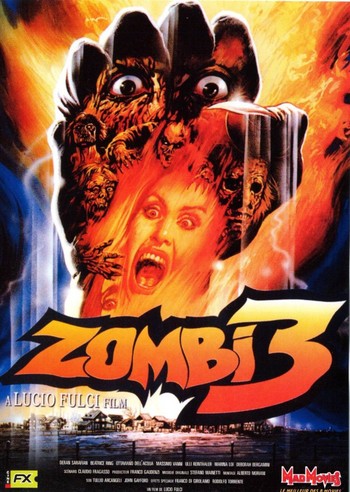 Zombi 3 is a 1988 film and the sequel to Lucio Fulci's Zombi 2. The film was the brainchild of schlockmeister Claudio Fragasso and was originally under the direction of Fulci himself before he was replaced with Bruno Mattei.

Dr. Holder, a scientist stationed in the Philippines, is working on a virus called Death One with the hopes of bringing the dead back to life. Little does he know, the virus does more than that: it kills the living in addition to reanimating the dead. Horrified at how his work could have such killing potential, he volunteers to turn in his resignation and turn in what samples he has left.

Just before the samples can reach their intended destination, a couple of criminals driving a Ford Econoline show up to steal the box containing Death One. One is killed in the resulting shootout, but the other manages to escape with the box. Then he trips, and the box breaks. While trying to pick it back up, he accidentally touches the liquid and flees to the nearest hotel. No matter what he tries, the infection spreads and he dies.

A decontamination squad is sent to comb the area, and the blood samples left by the nutjob are traced to the hotel. The decontamination squad rounds up everyone inside and kills them after recovering their quarry. General Morton orders the hotel patrons and staff buried in a mass grave and the criminal brought to him. The body is then burned; as Dr. Holder fears, the ashes infect the air and turn the living into the living dead.

Meanwhile, a trio of GIs on vacation and a group of tourists unite against the ever-growing threat of the living dead...

Followed (albeit in the US only) by Zombi 4: After Death (a.k.a. Oltre La Morte)