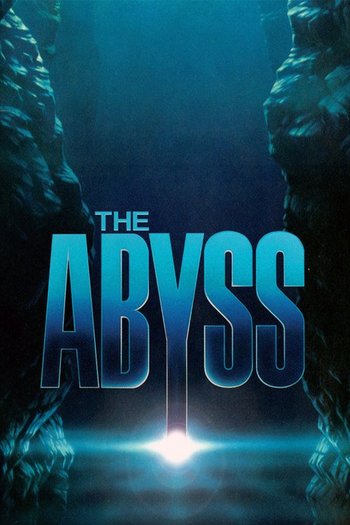 The Abyss is a 1989 Science Fiction film, written and directed by James Cameron and starring Ed Harris, Mary Elizabeth Mastrantonio, and Michael Biehn. The original musical score was composed by Alan Silvestri.

The movie follows the efforts of a U.S. SEAL team, inserted into a civilian experimental underwater oil rig, to salvage a nuclear submarine that sank after an encounter with an unknown underwater presence. Before long, they find themselves trapped underwater in the Cayman Trough and their communications with the surface cut off while a hurricane rages above them. As tension mounts and tempers flare in the tight quarters, they discover that they are not alone in the Cayman Trough - something unknown and inhuman is watching them...

This might forever hold the record for most technically complex movie ever made. Cameron, crewmembers and major cast members had to become dive-certified, since some of the filming took place in a set built inside (and under the surface of) a flooded, partially-built nuclear reactor containment vessel. (Cameron spent so much time underwater that he regularly had to spend time in decompression chambers, viewing dailies while hanging upside down in the pressure tank.) Many of the FX shots were done with precisely constructed models and green screens. The "water tentacle" was a wildly expensive, difficult and groundbreaking piece of CGI effects.note It was considered so difficult that the script was written in such a way that, if the shots couldn't be pulled off, the entire sequence could be dropped without significant changes to the rest of the film. With today's tech-infrastructure the movie could be made at a fraction of the cost with full CGI, but in 1989 the shots were often live footage combined with green screen models, matte photography, animatronics and CGI elements.

A novelization of this film was written by Orson Scott Card, based on the screenplay. Mastrantonio, Biehn, and Harris read the first two chapters, which were extrapolated by Card from the script, to prepare for their characters.

Character tropes (including the aliens) go on to the Characters Sheet.