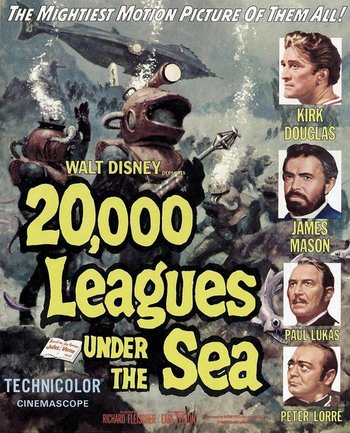 A whale of a tale.
There is hope for the future. When the world is ready for a new and better life, all this will someday come to pass... in God's good time.
-Captain Nemo's Last Words
Advertisement:

20,000 Leagues Under the Sea is a 1954 adventure/steampunk film produced by Walt Disney Productions and directed by Richard Fleischer. It is without much doubt the most famous motion picture to be based on the novel of the same name by Jules Verne.

The film featured Kirk Douglas as Ned Land, Paul Lukas as Professor Pierre Aronnax, Peter Lorre as Conseil, and James Mason as Captain Nemo, as well as a memorable design for the Nautilus and, of course, the memorable giant squid attack.