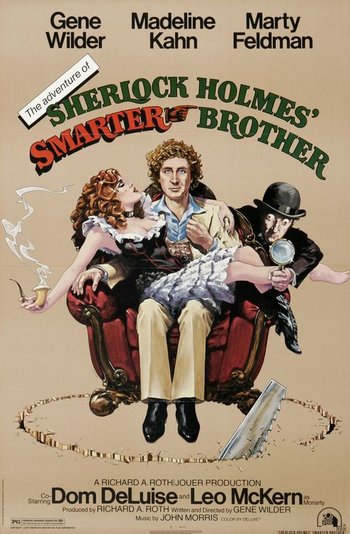 "Why don't we all drink some very sexy wine?"
—Sigerson Holmes
Advertisement:

This 1975 comedy film is the directorial debut of Gene Wilder, who also wrote the screenplay and stars in the title role.

Many fans will recall that Sherlock Holmes did in fact have an older brother, Mycroft, who by all accounts was indeed smarter than Sherlock, yet too lazy to accomplish what Sherlock had. This film follows his younger brother Sigerson's Day in the Limelight.

London, 1891: Jenny Hill (Madeline Kahn), an opera singer and bride-to-be of the new Minister of Defense, is blackmailed into stealing the "Redcliff Document", which details Britain's defense plans. The blackmailer, Eduardo Gambetti (Dom DeLuise), intends to sell the document to Professor Moriarty (Leo McKern), who plans in turn to sell it to the highest bidder. Because Holmes and Watson are off on holiday, Sgt. Orville Sacker (Marty Feldman) of Scotland Yard seeks out the services of Sherlock's younger brother, Sigerson, also a detective. Sigerson (Wilder) is insanely jealous of his older brother's success, and leaps at the opportunity to prove his own self-proclaimed superior intellect.

The rest of the movie runs mostly on Rule of Funny.