Hiroshima as a Unit of Measure 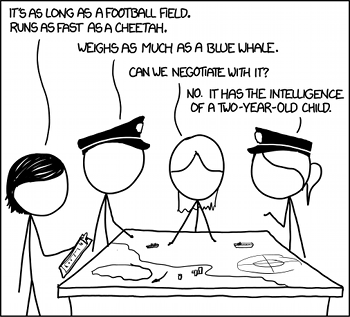 As it turns out, the Frequently-Made Comparisons Monster

could only be destroyed with a nuclear weapon carrying the destructive energy of the Hiroshima Bomb.
Are the radio-waves from objects in space any threat to us?
No, they are extremely weak. The total energy collected by radio astronomers over the history of radio astronomy amounts to about the energy required for a mosquito to make one push-up!
— Dr. John Simonetti of the Department of Physics at Virginia Tech

How do you show someone the force of an erupting volcano via print, or the height of the Burj Khalifa over a 17-inch screen?

No matter how huge something may be, it's hard to wrap your mind around the scale of it without seeing it for yourself, or having some point of reference to compare it to.

That's where this trope comes in. A simple way to show the size of something is to compare it to something else that a lot of people are familiar with. That's why many documentaries, especially ones of the "World's Biggest Whatever" variety, will use measurements that compare things to familiar or historic events, places, and objects.

Basically, any unit of measure that equates to something extreme in that property, but is still rather vague and hard to comprehend since the average person doesn't know what that ''is'' off the top of their head. Bonus points if the number of the unit of measure is still ridiculously large (e.g. 1,000,000 Hiroshimas) thereby defeating the purpose of describing it in those terms even if the unit was something people would intuitively understand.

are of this form.

This trope is for unusual units for quantities that have well-defined values in ordinary non-facetious units. If you measure an amount of something that usually is not given a numerical value at all, such as "evil" or "beauty", it is an Abstract Scale, or sometimes 20% More Awesome. See also Fantastic Measurement System.

open/close all folders
Anime & Manga
Comedy
Comic Books
Comic Strips
Fan Works
Films — Live-Action
Folklore
Literature
Live-Action TV
: What makes this particularly egregious is that about half of these "units" aren't even constant. For example, soccer fields are (probably, there is no official definition on Galileo's side) supposed to be one hectare, but German soccer fields can be anything from slightly bigger to not even half as big. The mass of a VW Golf varies not only with new generations every few years, but also depending on how much money you're willing to invest. The weight of a fully-grown elephant may vary by a factor of 2.5. The length of a German train may even vary by a factor of over 20.
Magazines
Music
Podcasts

In "The Whale Episode," Sid and his friends explore the concept of "non-standard measurement" and one of the ways they do so is by measuring things using their friend Gerald.

In "The Whale Episode," Sid and his friends explore the concept of "non-standard measurement" and one of the ways they do so is by measuring things using their friend Gerald.