Western Animation / Craig of the Creek 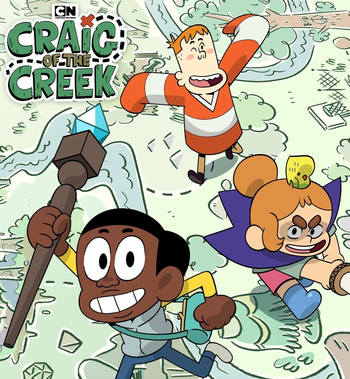 Clockwise from top: J.P., Kelsey (with Mortimer), Craig.
"The creek is a place where we can all be whatever we want!"
— Craig, talking about the titular creek

Created by Matt Burnett and Ben Levin, who served as the head writers of Steven Universe for its first five seasons, Craig of the Creek is an American animated television series created for Cartoon Network. The series follows the adventures of the ever imaginative Craig and his two best friends Kelsey and J.P., as they explore the woods outside their small town of Herkleston and interact with a myriad of eccentric characters: from paintball players that use near-lethal ammunition to a tribe of kids that hoard lost toys in the sewers.

The pilot for the show was released on the Cartoon Network App/VOD in December 2017, while the series proper similarly premiered on these services on February 19, 2018; the show made its television debut on March 30, 2018.

Craig of the Creek provides examples of:

In short "The Williams", Craig imagines an opening for a sitcom about his family, which is a homage to Family Matters.

In short "The Williams", Craig imagines an opening for a sitcom about his family, which is a homage to Family Matters.