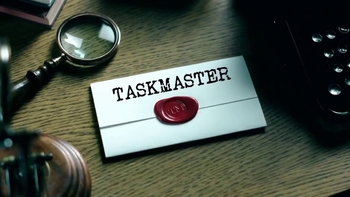 Your task is to read every trope listed, then click the "Random Trope" button. Fastest person to read every single trope wins. Your time starts now.
"In this show, I, Greg Davies, make some accomplished, but needy comedians to do stupid things for me. Why? Because I can. I'm a powerful man. Look at me."
— The Taskmaster, Greg Davies
Advertisement:

Taskmaster is a British Comedy Game Show which first aired on Dave in 2015, before switching to Channel 4 in 2020. Greg Davies is the host and titular Taskmaster, and is assisted by Alex Horne (who also acts as showrunner and the head task-deviser behind the scenes). Each series features five different contestants (almost invariably stand-up comedians or comedy actors / perfomers with the occasional wildcard), with a "Champion of Champions" two-part special following the fifth series featuring the winners of each series to date.

The show consists of the contestants being assigned a series of odd, seemingly simple and trivial yet often quite surprisingly challenging tasks to complete, many of which involve some kind of creative or lateral thinking. They are then ranked and given points (usually between 1 and 5) according to how well (or not) they completed the task, either based on relevant measurable criteria (fastest completion, most required objects accumulated, etc.), Greg judging them on his personal preferences, or some combination of the two. Hilarity Ensues.

While the nature of the tasks vary, each episode follows a general structure of the prize round, about three-four pre-filmed tasks, and the final in-studio task.

A lot of the show's appeal and humour comes from the contestants thinking outside the box, abusing the Exact Words of a task letter, and employing Loophole Abuse to bypass certain task requirements; a trope so well-loved and used so much by this show that we had to give it its own page! This means a lot of the contestants' attempts at a given task can be very different to one another.

The show has proven incredibly popular in the UK, and has spawned a multi-media franchise spanning international TV adaptations, books, a board game, and a podcast. More information can be found on the franchise page.

Full episodes can be viewed on UKTV Play

also features every episode broadcast so far (albeit currently region-blocked in some parts), along with clips and compilations. The first episode of the Finnish version of the show, Suurmestari, is available on the channel as well. In March 2022, a new dedicated subscription service called Taskmaster SuperMax+

was launched, allowing viewers from around the world to watch the series ad-free.

Complete summaries of casts, episodes and tasks can be found at the show's Recap page. A brief cast listing for each series of the British edition can be found in the folder below.

Now has its very own character sheet. Fill in tropes related to contestants and their time on the show there. Your time starts now!

Not to be confused with the Marvel Comics supervillain/anti-hero of the same name, with the professional pseudonym of wrestler Kevin Sullivan or with the video game TaskMaker.

Go to each of the following pages and read through the tropes related to Taskmaster. Your time starts now:

So what have we learned today? We've learned that the Tasks set by the Taskmaster are Serious Business, Nish Kumar and Mark Watson know how to make a song

in under 30 minutes, and of course, that TV Tropes will indeed ruin your life!. But for now, please give it for a round of applause, for you! You completed the Task! Goodnight!
Feedback