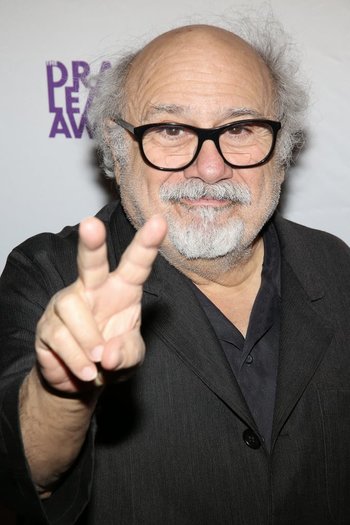 Enter the Trashman.
"It's fun to be on the edge. I think you do your best work when you take chances, when you're not safe, when you're not in the middle of the road, at least for me, anyway."
Advertisement:

) and strong New Jersey accent, DeVito first gained prominence with his portrayal of caustic taxi dispatcher Louie De Palma on the 1978–83 TV sitcom Taxi, for which he won a Golden Globe and an Emmy. He's since become a major film star with numerous credits to his name. In addition to acting, DeVito is also a director and producer who co-founded Jersey Films, a production company responsible for such films as Pulp Fiction, Garden State, Freedom Writers and its television sister company is responsible for Reno 911!.

DeVito returned to television in 2006, starring as Frank Reynolds in the FX (later FXX) sitcom It's Always Sunny in Philadelphia. He also directs and produces graphic short horror films for his Internet venture The Blood Factory. He has appeared in several of them, as have friends of his and members of his family.

He is not the voice of Detective Pikachu in either the game or the film, no matter how much you ask or plea for him.note He even said, "What the fuck is Pokémon?" when he actually was asked if he would do so. (Ironically, he was actually scouted to voice Pikachu, but he was turned down over Ryan Reynolds.) What he is though, is a "dibby".