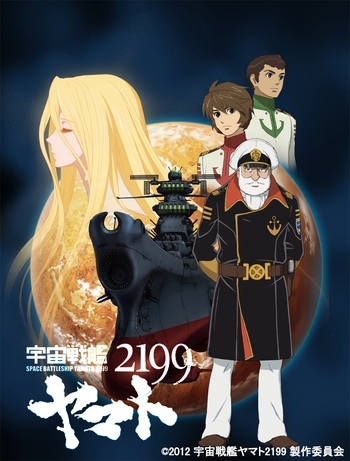 October 1974. A 26-episode anime series entitled Space Battleship Yamato, aired on Yomiuri TV without much fanfare. It told the story of humanity's last-ditch effort to avoid extinction via the irradiation of the planet Earth by a hostile alien race. Its one hope lay in the eponymous battleship Yamato — rebuilt into a warp-capable ship — whose crew would then use it to journey to the far-off planet where salvation was supposed to lay.

The show would eventually become a seminal success, becoming the first anime to win the Seiun Award (the Japanese equivalent to the Hugo award), a feat that was not to be repeated until 1985, with Hayao Miyazaki's Nausicaä of the Valley of the Wind. For many it marked a paradigm shift in storytelling, and influenced generations of viewers, some of whom (like Hideaki Annonote Who drew the storyboards for 2199's Opening Titles) would eventually work in the industry in turn.

For American and some Western viewers, Yamato (via its edited version Starblazers) would be their Gateway Series into anime.

Fast forward to April 2012. After years of legal dispute between the series' co-creators Nishizaki and Matsumoto, the series is given a new breath of life with a remake, the eponymous Space Battleship Yamato 2199. Featuring modern production standards and a vastly-enhanced budget, the new series seeks to retell the classic story for a brand new generation, at the same time giving even long-time fans and veterans of the franchise something to look forward to, as it's not quite the same story they grew up with.

Initially premiered as a theatrical release (with every three or four episodes edited together to make up a movie), then as a direct-to-order Blu-Ray/DVD "OVA", the series finally aired on TV for the Spring 2013 anime season.

Two movies were released for the series. While the first movie was a simple compilation of the series, the second movie, Hoshimeguru no Hakobune, officially translated as Odyssey of the Celestial Ark and sometimes unofficially as Ark of the Stars, features an all-new story, focusing on the legacy of the Akerian civilization, which first seeded the galaxy with humanoid life, and from whom the current factions in the series — the Iscandrians, the Gamilons, and even Humanity — are all descended.

Voyager Entertainment (the licensors for the Star Blazers adaptation of the original series) announced plans to release the series as Star Blazers 2199 in English, and screened a pilot dub of the first episode (produced by Bang Zoom! Entertainment) at the July 2013 Anime Expo and Comic-Con San Diego. They then released limited subtitle-only editions of the series, and while the release of the final two volumes was postponed indefinitely, they promised they would be out in the wild eventually...

...Except Voyager's plans went nowhere. Cut to November 3rd 2017, when Funimation announced their own plans to release the series as Star Blazers: Space Battleship Yamato 2199 as a part of their Fall 2017 SimulDubs. Crunchyroll started showing subtitled episodes on November 8, 2017.

. A pair of sequel films, Space Battleship Yamato 2205: A New Journey, has been released.

Now has a Character Page for the characters unique to the remake. Still very much a work in progress however.

Due to the imperialistic attitude of Gamilas, Non-Gamilans are often looked down upon as Second-Class Citizens of their Empire. Despite the outlook of most individuals within the Imperial Navy, many Zaltzian officers are proud to serve the Empire to the best of their ability.

Example of:
My Country, Right or Wrong

Due to the imperialistic attitude of Gamilas, Non-Gamilans are often looked down upon as Second-Class Citizens of their Empire. Despite the outlook of most individuals within the Imperial Navy, many Zaltzian officers are proud to serve the Empire to the best of their ability.