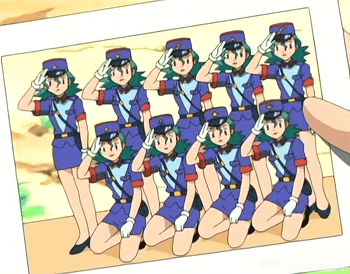 Why bother with Uncanny Family Resemblance, when you can have every member of a family or even perfect strangers as the exact same person! Same taste in food, same way they style their hair, same profession, same mannerisms, and they all probably share the same Hive Mind as well. They may even all have the same name. This isn't just a Recurring Character — every town has their own. These are Inexplicably Identical Individuals; there's no reason for them to be perfectly identical— though the series may try to Hand Wave it as them being related— they simply are.

Occasionally, they fall into My Species Doth Protest Too Much, having one who's markedly different. The episode often revolves around them.

Compare and contrast to the game trope of You ALL Look Familiar. Also compare Single-Minded Twins and Only Six Faces. Contrast with the Recurring Extra, where it really is the same character(s) in every town. See also Identical Stranger (where the resemblance is plot important), Clone Army (which is people looking identical because they were created to be that way), and Clone by Conversion (which is when people are modified into replicas of someone else).

That's a LOT of Officer Jennys.

That's a LOT of Officer Jennys.