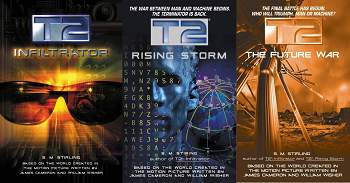 The T2 Trilogy is a set of novels in the Terminator continuity, written as sequels to Terminator 2: Judgment Day by S.M. Stirling. When its existence is jeopardized by the destruction of the T-800 remnants in the 1990s, SkyNet sends Serena, one of a new breed of super-realistic cyborg stealth operatives, back in time to ensure its existence and, if possible, the destruction of the Connors. This forces the Connors to team up with Dieter von Rossbach, the Austrian-American ex-counter-intelligence agent who served as the base model for the T-800s, in order to stop SkyNet's plans.

The books are out of the main continuity of the series following Terminator 3: Rise of the Machines, which chose a rather different path for the universe to take, though they arguably inspired (or at least predicted) certain elements of that film (for instance, the famous Sgt. Candy deleted scene is essentially a major subplot from these novels Played for Laughs). On the Terminator Wiki

, they are treated as an alternate timeline, similar to the reboot and alternate continuity entries in the film series. In any case, the trilogy consists of three novels: