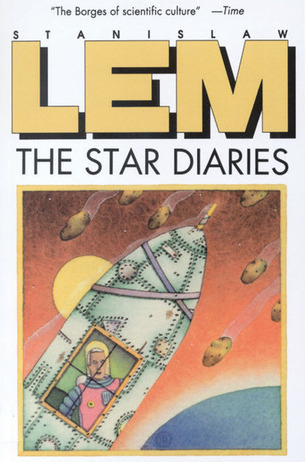 The Star Diaries (Dzienniki gwiazdowe) by Stanisław Lem, often published together with their sequel Memoirs of a Space Traveller, are supposedly the journals and travelogues of Ijon Tichy, a famous space traveller, recording his remarkable adventures exploring the cosmos.

Besides his identity as a pioneer of space exploration and an established travel writer, Ijon Tichy is an amateur scholar who moves in scientific circles both on Earth and around the Galaxy, and, if the need arises, an ambassador of humankind on the parquet of galactic diplomacy (he has even been known to serve his home planet as a secret agent in undercover missions); he is a noble soul wishing to go where no man has gone before, to push the limits of humanity’s horizon and bring the cosmos together in peace, as a brotherhood of all sapient civilizations...

...that, or a charlatan and liar, who makes a living off bamboozling gullible Earth-lubbers with astronautical folklore and hair-raising tall tales too absurd to be believed by anyone with so much as a grain of common sense. Take your pick.

The Star Diaries (first edition in 1957, expanded in 1966 and 1971) consists of short stories, all narrated by its personable Space Munchausen. In the process, the book satirizes or parodies countless science fiction tropes, yet it also explores - in a comical guise, but otherwise quite straightforward - many classical themes of science fiction; such as meeting and interacting with alien civilizations, Time Travel, Artificial Intelligence, and the consequences of technological and scientific progress for humanity.

The sequel, Memoirs of a Space Traveller (1982), also consists of short stories, but differs notably from Star Diaries in that most of the stories are set on Earth and are also quite serious, even dark (though not all of them). Mostly they feature Tichy, now a respected celebrity, meeting eccentric scientists and inventors, and only a few deal with Ijon Tichy’s adventures with alien civilizations.

The Ijon Tichy character went on to star in three more satirical novels: The Futurological Congress (1971), Observation on the Spot (1982, no translation), and Peace on Earth (1987), where he accidentally wanders into the range of a brain-damaging experimental weapon and gets an Evil Hand (and leg, and the entire left half of his body).

The Star Diaries provide examples of the following tropes:

Memoirs of a Space Traveller provides examples of the following tropes: