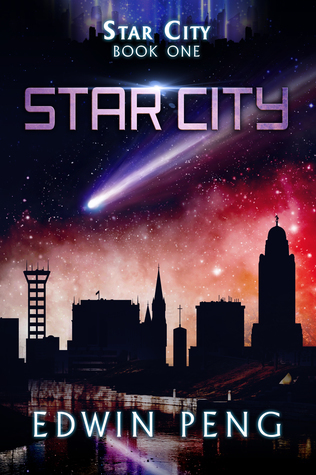 Star City is a Young Adult Science Fiction series by Edwin Peng. It consisting of Star City (2017), Friendship Village (2018), and Embassy Town (2019). There are currently three companion short stories, all of which take place just before Star City: The Announcement (Emma's point of view), The Test (Sepporinen's point of view), and The Meeting (Ngizzida's point of view).

After the alien race known as the Ba'ren make first contact with Earth, eighteen-year-old Emma Smith is ready to capitalize on this historic opportunity, beats thousands of applicants for the position of student ambassador. She knows helping the Ba’ren cure osteosarcoma will kick-start her biomedical engineering career, not to mention allow her to learn more about the mysterious aliens.

Sepporinen, a young Ba’ren asteroid miner, cares little about meeting humans. He seeks only riches and glory in prospecting the solar system’s asteroids, but the Ba’ren government inexplicably sends him to Earth to assist with the osterosarcoma research project.

Emma and Sepporinen draw closer as they work together, and discover far more is at stake than what their respective governments have let on. As political struggles intensify between feuding human and Ba’ren factions, anti-alien sentiment on Earth reaches a lethal pitch. The unlikely pair, determined not to be pawns in this complicated game of life and death, must risk everything to maintain the fragile peace between their two species.