Literature / A Sound of Thunder 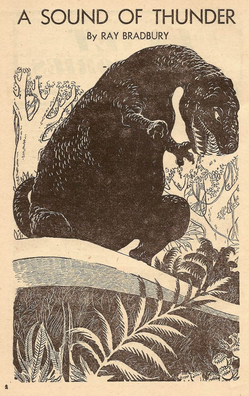 A Short Story first published by Ray Bradbury in the Collier's magazine, June 1952 issue. "A Sound of Thunder" is one of the Trope Namers for Butterfly of Doom, because this story introduced the Time Travel plot where small changes in the past snowball into the future.

The story is set in the (then-distant) year of 2055, shortly after another Election Day result. The protagonist is a hunter known simply as "Eckels", who prepares to use time travel to visit the age of the dinosaurs and kill a Tyrannosaurus rex. His guide is very emphatic about the need to prevent changes to the timeline, and exposition of time travel rules and setting details are interwoven into the narrative. Naturally, the rules are violated when Eckels runs off the path, but nothing seems to have been broken yet...

"A Sound of Thunder" has been adapted several times, with a 2005 movie released by Warner Bros., an EC Comics adaptation available here

, as well as a spin-off novel series and the short story series Rivers of Time.

Not to be confused with the Pink Floyd live album/concert film A Delicate Sound Of Thunder.

The short story contains examples of: