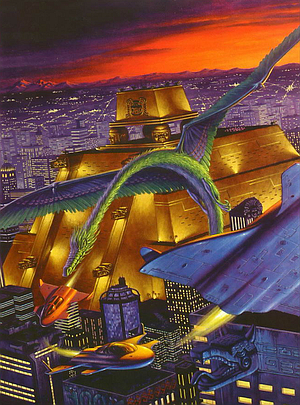 Made possible by Aztechnology
Advertisement:

A common feature of alternate histories where the point-of-divergence is far enough back is that a Mayincatec civilization has somehow survived to the present day, and now rules a large chunk of the Americas.

Like Zeppelins from Another World, generally done as a throwaway "Look how different this world is" detail, without any serious or detailed consideration of how it happened or what the geopolitical effects were. (Possibly correlated with alternate worlds where the technology level never got high enough for zeppelins.)

Incidentally, in Real Life, a lot of the original Maya, Aztec and Inca culture remained intact or was assimilated into their modern Hispanic heritage, and there are pockets, especially those of non-mixed ethnicities, which still practice their old traditions. Historically, while the ruling class of the Aztec and Inca empires were deposed, many of the nearby nations who allied with the Spaniards against them did get to keep their political structures as a reward, and slowly adapted them into imperial administration over the years (often helped by native aristocrats smartly marrying off their daughters to important Conquistadores). Maya culture also survived in larger numbers, in part due to its highly decentralized rulership compared to the mentioned empires.

If it's the focus of the story, subtrope of Alternate History Wank. Compare also Afrofuturism, which treats African cultures much the same, though generally in a more relatable/positive manner.