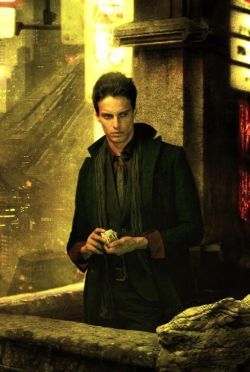 "Would you bring back the blood, the dying cries, the sucking chest wounds? The constant war? So we’re caught between two poles of hypocrisy. We sacrifice our right to think of ourselves as good people, our right to think our life is good, our city is just. And so we and our city both survive.”
— Caleb Altemoc
Advertisement:

In a world torn between sorcery and dead gods, risk management for a water utility company could be a deadly profession. When shadow demons plague the city reservoir, risk manager Caleb Altemoc is sent to cleanse the water for the sixteen million people of Dresediel Lex. But Caleb has more than his job security and love life to worry about when he discovers that his father, the last priest of the old gods, has broken into his home and is wanted in connection to the attacks on the water supply.

Preceded by Three Parts Dead, followed by Full Fathom Five. See the series' page for tropes that are common to the whole Craft Sequence.