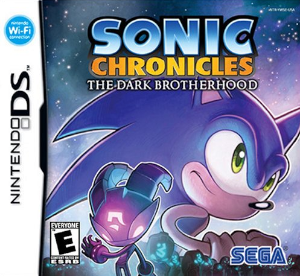 Sonic Chronicles: The Dark Brotherhood (2008) is a RPG Spin-Off of the Sonic the Hedgehog franchise for the Nintendo DS, developed by none other than BioWare.

A while after Dr. Ivo "Eggman" Robotnik's latest defeat, the doctor is still missing in action, and is presumed dead. The peace doesn't last very long, though, as Sonic receives a call from Tails explaining that Knuckles has been kidnapped by a mysterious new group named the Marauders, who have also stolen all the Chaos Emeralds. Sonic then teams up with Tails, Amy, and Rouge in order to rescue Knuckles. Things quickly spiral out of control, with a renewed Eggman (who seems to be on the side of good), the Marauder Army, and having to go to another dimension to retrieve the stolen Chaos Emeralds, where they will have to ally with other races they meet (and rescue), defeat the Dimension Lord Imperator Ix, and set things right once and for all.

A sequel was announced, but nothing's been heard since. The game took heavy inspiration from the Archie Comics canon, causing a legal situation with writer Ken Pendersnote who claimed to hold ownership over vast swaths of the Sonic multiverse. While he lost all cases against Sega and other parties aside from Archie, Archie's incompetent record-keeping caused the courts to rule in Penders' favor over characters he explicitly created during his time as a writer, leading to Archie and Sega forcing a Soft Reboot on the comic in 2013, before Sega finally cancelled the Archie run in favor of a wholly new continuity a few years later, though Sega ultimately won the case, but BioWare itself had been bought by Electronic Arts during the game's development, making it unlikely they would've ever developed the sequel to begin with even if the legal problems hadn't arisen, and Sega never announced who else would be developing the sequel either.