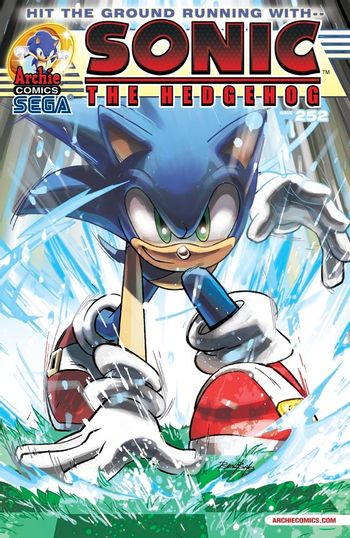 The comic debuted in November 1992: A four issue mini-series were commissioned to test the waters, after which a monthly publication run began in July 1993. Originally, the book was a tie-in for Sonic the Hedgehog (SatAM), though mixed with goofier elements from the other animated Sonic show at the time; Robotnik had already taken over the idyllic Kingdom of Acorn, establishing his headquarters in the former capital Mobotropolis, now renamed Robotropolis, from where he waged his campaign to take over the world by turning all organic creatures into robots. He was opposed by the Freedom Fighters, a motley crew who operated out of their secret base of Knothole within the Great Forest.

In the beginning, the book was a lighthearted, gag-centric affair. Each issue would feature a few silly stories of the Freedom Fighters thwarting Robotnik's dastardly, ridiculous plans while making sure to tell as many terrible (usually pun-based) jokes as possible and Breaking the Fourth Wall left and right. This being a comic tie-in, there were frequent jabs at Silver Age DC Comics, such as the Mirror Universe Robotnik turning out to be a kindly veterinarian and being harried by the "Anti-Freedom Fighters" (à la Earth-3 Luthor and Ultraman), and a Crisis on Infinite Earths-style plot in which an army of Sonics teamed up to beat a colossus.

Over time, the book began to develop distinct mythology — along with the occasional video game tie-ins, such as the "platinum" Sonic CD issue, the one-shot Knuckles Chaotix special, and a three-part miniseries which was (very) loosely based on Tails Adventure. The book moved from one-off gags to multi-issue arcs and drama as early as issue #17's "Princess Sally's Crusade," which took a somber tone and was the first time one of the Freedom Fighters died (on-panel, no less). This phase was arguably closest in tone to the SatAM series.

The book surpassed the cartoon in grittiness at around issue #39, after Sonic was caught and temporarily roboticized, leading to his gleeful prosecution by Antoine (still a jerk at this juncture) and banishment from Knothole as punishment for the havoc he caused. In the lead-up to issue #50, Sonic's Love Interest Sally was betrayed by a spy and killed off... until someone higher-up decided they didn't like it, so she was instead put in a coma. Meanwhile, Knuckles got his own short-lived spinoff series which dealt with the mostly-original lore surrounding his island's Lost World. In another side-reference, Knuckles' tribe were preserved in a high-tech city on the island, but in a pocket dimension; Knuckles sought to restore them much like Superman's Kandor or New Krypton. It introduced a big ensemble of characters across its 32-issue life, most of whom made the jump into the main series once his book got axed.

The late-nineties had a drought of mainline Sonic games, so the book was momentarily allowed to have its own identity. Robotnik went away for a while (later to return as "Eggman"), and the stories that followed were more soap-operatic, with Sally's royal angst, love triangles, politics, and long lost relatives coming out of the woodwork. The artwork got a lot more detailed and moodier, too; although there were glimpses of the original spirit of SatAM, such as Sonic being mistaken for a green hedgehog who fought a robotic "High Sheriff" with slings and arrows.

The release of Sonic Adventure in '99 retooled many of Sonic's canonical elements, such as Sonic living among human society, and Archie had to bend into pretzels trying to keep up. In 2013, the book underwent a Continuity Reboot, discarding many of the previous characters and stories due to a nasty legal battle with previous writers. While most of the core cast remained intact, the book was essentially overhauled to more accurately reflect the video games, both old and new. This sadly undid years of storylines and character development, but on the upside, it provided a good jumping-on point for new readers without having to worry about continuity. In 2013, it crossed over with Archie's Mega Man title in Sonic the Hedgehog/Mega Man: Worlds Collide, which was used to justify the aforementioned reboot, followed by another crossover

. SEGA insisted in the same statement that Sonic comics would continue, albeit not in the same form and with a different publisher. Two days later, at San Diego Comic-Con 2017, it was revealed that IDW Publishing would start publishing a new series of Sonic comics from April 4, 2018.

Fan-continuations of the original, non-rebooted universe also exist, such as Sonic Retold and Archie Sonic Online (which also includes a fan restoration of the intended post-retcon Sonic Universe story that was meant to follow #94

Megabeatman Reviews - Sonic & Megaman 2 Worlds Unite [Pt 5]: In the fifth part of the comic crossver, Xander Payne saves Eggman and Dr. Wily from Sigma but teleports them right to the heroes. To avoid imprisonment, they agree to help them...save Xander who decides to stay in his cell. The doctors think him crazy for it.

Megabeatman Reviews - Sonic & Megaman 2 Worlds Unite [Pt 5]: In the fifth part of the comic crossver, Xander Payne saves Eggman and Dr. Wily from Sigma but teleports them right to the heroes. To avoid imprisonment, they agree to help them...save Xander who decides to stay in his cell. The doctors think him crazy for it.