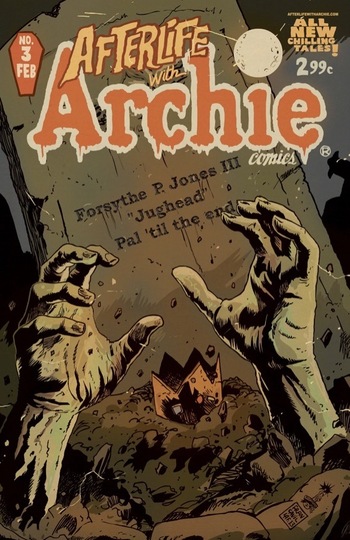 This is how the end of the world begins...
Advertisement:

After the successful addition of Kevin Keller in 2010, Archie Comics began looking at ways to expand their audience and perhaps modernize their image for the 21st Century.

Hey, they thought, those zombie movies seem to be pretty popular nowadays...

It's a dark and stormy night in Riverdale, and Sabrina the Teenage Witch is disturbed from her sleep by her friend Jughead Jones, whose beloved pet dog was struck by a car. Though her Aunts try their best, there's nothing to be done — Hot Dog is long dead. However, Sabrina is moved by Jughead's plight and they plot a way to bring him back. Naturally, the spell goes awry, and Jughead becomes the Patient Zero for a full-blown Zombie Apocalypse right in the heart of Riverdale. And that's just the beginning...

Written by Roberto Aguirre-Sacasa and drawn by Francesco Francavilla, the result is a full-fledged horror series featuring the sprawling cast of the Archie series. Darker and Edgier is the flavor of the day, with bold, impressionistic coloring and a helping of Nothing Is Scarier (it is still Archie, after all; they've got to get by with the equivalent of a PG-13 rating). It's Archie Comics' first foray into the Direct Market (they typically target supermarkets and newsstands), and the initial printing of Issue #1 sold out. Twice.

Afterlife with Archie provides examples of: