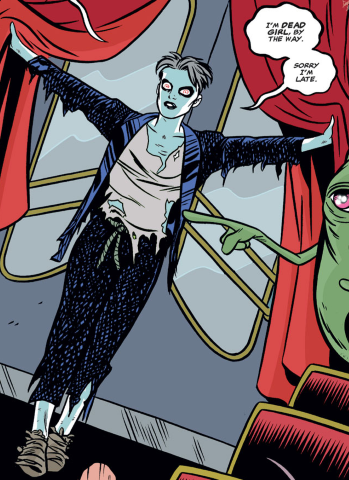 "Roland searched the continent
For the man who done him in,
He found him in Mombasa,
In a bar-room drinking gin,
Roland aimed his Thompson gun,
He didn't say a word,
But he blew Van Owen's body
From there to Johannesburg."
— Warren Zevon, "Roland the Headless Thompson Gunner"
Advertisement:

The Revenant is an older variety of zombie, originating in European folklore. Revenants are less prone to rotting and falling apart than other zombies, in addition to normally retaining intelligence and memories of their previous lives. They are driven by a single burning purpose, most often vengeance or true love, driven by a desire so strong it can overcome even death. In some mythological circles a revenant zombie can be brought back by things such as an improper burial or simply the person in question not realising they are dead and shouldn't be moving around. There's a reason "Revenant" and "Revenge" come from the same French root word "revancher" (to revenge upon).

While conceptually very old, and the prototype from which many other undead derive, the revenant has largely faded from modern works in favor of more modern breeds of zombie, as well as the bloodsucking vampire and the sorcerous lich. Often Living on Borrowed Time.

Of note is the fact that unlike other types of undead from across cultures and fiction, a revenant could be a fresh corpse, skeletal, or anything in between.

When the character retains not only intelligence, but also good looks, it is Attractive Zombie. May overlap with Friendly Zombie if they are benign and have good intentions.