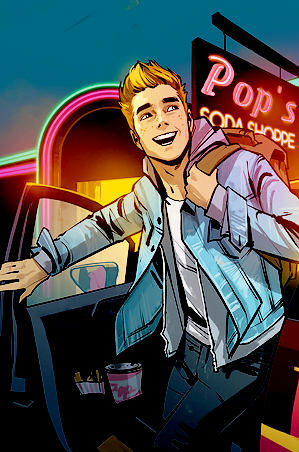 "Hi. My name is Archie Andrews. Welcome to Riverdale."
Advertisement:

In 2015, Archie Comics ended their main comics after 666 issues. In its place, they rebooted the franchise. The reboot, also known as "New Riverdale", is a more modern take on the series as a whole. Unlike other 'realistic' retools (for example the previous "New Look" revamp), this is a permanent choice, though Archie will still be releasing comics in their classic continuity.

Archie Andrews is a seventeen-year-old boy living in Riverdale, alongside his best friend "Jughead" Jones and longtime girlfriend Betty Cooper. He's an average American teen living a normal life. After an incident he breaks up with his girlfriend of ten years and things start to change. Veronica Lodge moves into town and Archie's love life takes an interesting twist.

Titles that exist within this new continuity include:

These comic books provide examples of: