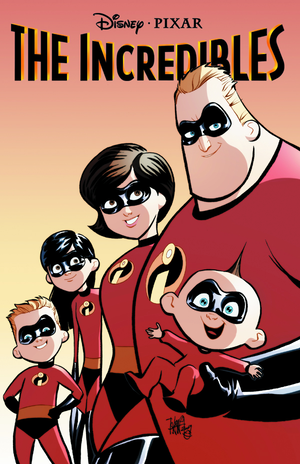 The Incredibles is a comic book followup to the movie of the same name, headed by Mark Waid and Landry Walker, and published by Boom! Kids in 2009 to late 2010 when Boom! lost the Pixar licenses, costing the series its ending being published. Marvel Comics began publishing magazines compiling entire arcs, but these were cancelled. The original film's sequel rendered the comics Canon Discontinuity, probably putting the final nail in them ever getting a conclusion.

The storyline itself follows the events of the film and Rise of the Underminer, with more supervillains crawling out of the woodwork now that supers are allowed to work again. Not just singular villains, but entire villain groups who remained mostly hidden have since re-emerged, though when the Confederacy of Crime falls, a newer group rises from the ashes: The Unforgivables, lead by the prematurely aged Xerek (The villain of early drafts of the film).