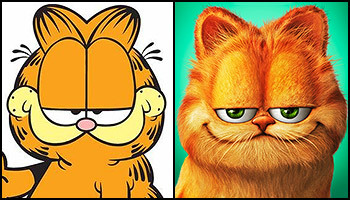 It was once quite common for characters to have Black Dot Pupils, sometimes in the form of Black Bead Eyes or Pie Eyes instead of having irises. While it's in no way rare these days, it's also not quite as typical as it was before. In remakes, sequels of older media or (in the case of Long-Runners) as the series progresses, the characters will often be given coloured irises instead of their traditional dots.

Another variation is for irises to appear coloured during special circumstances, such as an Art Shift to a less simplistic style or when a character undergoes a transformation.

Marcy's eyes briefly enlarge and are shown to be brown.

Marcy's eyes briefly enlarge and are shown to be brown.