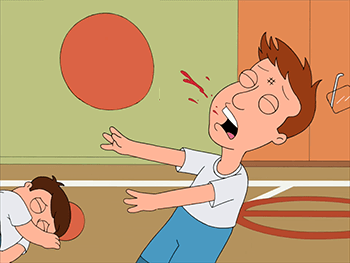 It seems that in fiction, whenever a kid goes to gym class, the mean gym teacher or coach will make them play dodgeball, much to the delight of The Bully and the despair of the nerds and unpopular kids. Enough balls to resemble a Bullet Hell game will ensue.

Despite not being a particularly dangerous sport in Real Life, in fiction, dodgeball is as close as you can get to a Blood Sport without any actual death (...usually). Somehow, the inflatable balls weigh as much as a ton of bricks in TV Land. It's not uncommon for students to come out of the gym with injuries from nosebleeds to broken bones, and the perpetrators never seem to get in trouble for it.

This trope can often seem like Truth in Television to some kids, which is where the trope comes from in the first place. A more specific form of Gym Class Hell.