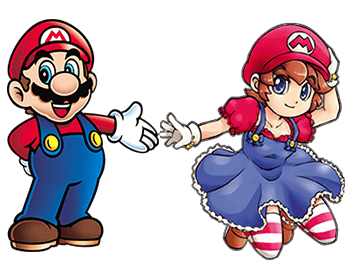 from Pixiv.
"I'd make a sexy chick!"
— Brodie, Mallrats
Advertisement:

For every given male character, there is a female version of that character, and vice versa.

They may be canonical. Most of them aren't. The internet has a fascination for producing gender swapping regardless of the context of the original character. Canon-derived examples of the trope tend to outlast their actual-canon inspirations (which are often single stories, or even short throwaway gags.)

No character is immune to this effect — not Darth Vader, not Master Chief — no one. note Not even Chuck Norris. Rule 61 lied to you.

Closely related to Gender Flip. When a separate character is a female knock-off of an existing male character, you have a Distaff Counterpart. Crossdressers, of course, provide their own version of this. There's a good chance that you'll see the character in question in a Gendered Outfit (like our lovely Maria at right, here).

One of the Rules of the Internet. Can (and often does) overlap with Rule 34. Since these female versions are often much cuter than their male counterparts, it can also overlap with Self-Fanservice and Fan Disservice.

Anime & Manga
Video Games
You know, Sieglinde Freud would have something to say about all this genderbending....
Feedback