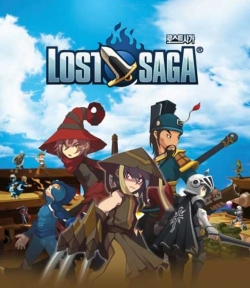 This is only the tip of the iceberg.
Advertisement:

Lost Saga is a Korean MMO that, like many others is free to play. The American version, once hosted by OG Planet, famous for other games it hosts such as La Tale and Rumble Fighter, and WeMade Entertainment USA, is now hosted by Z8 Games.

The basic premise of Lost Saga (subtitled "Fighting Action Heroes" for reasons that become blatantly obvious really quickly) is taking heroes from all parts time and having them beat the snot out of each other. It's a primarily PvP MMO, but a PvE mode, called "crusade", pits you against NPC skeletons. The game boasts a unique feature in that you are not bound to having only one character at a time. In fact, you can have several heroes at once. You even get an XP bonus for having at least 2, and having 5 effectively doubles your XP gained. Sadly, the heroes all run on a timer, so you have to continuously hire them (in 2 or 10 hour increments, with exceptions if you like Bribing Your Way to Victory).

The game has a unique battle system. Heroes are given four basic equipment slots: a trinket slot, a helmet slot, an armor slot, and a weapon slot. Heroes initially have four pieces of equipment specific to them, which are returned to them on respawn. These equipment pieces all have different in-battle effects and skills. However, players can obtain "epic" gears, which are essentially base equipment, but with enhanced stats and the ability to be equipped to any hero of choice. Some combinations have been deemed to be game breakers.