Webcomic / The God of High School 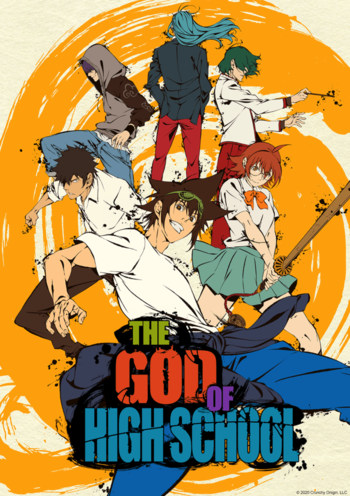 This story opens with a Korean senator talking with a prosecutor over the phone, the latter of which happens to be relaxing on an unnamed tropical island. After the call ends, said island is promptly destroyed by an unknown force. When an American satellite picks up what had happened, it is revealed that whatever did it left a giant, hand-shaped impression with a cross in the center palm.
Advertisement:

Around the same time, a certain teenager named Jin Mori is beating up several delinquents with his grandfather's brand of Tae Kwon Do. With a record of 299 fights, 297 wins, 2 ties, and 0 losses, he's happy to declare himself the strongest around.

On his way home, a strange, blond-haired man in a suit comes to him out of nowhere, declaring that he's worthy enough to enter a new martial arts tournament called "The God of High School", meant to enlist the best and brightest fighters of Korea for a chance at anything the winner desires. When Mori decides to simply ignore the man, the latter punches a path through an entire forest without touching a single tree, leaving a cut on our hero's cheek.

Impressed by the move, the teen agrees to participate if the mysterious man was able to beat him. Mori loses spectacularly. But when he comes to, he's absolutely ecstatic since he's finally found someone able to challenge him in a fight. So, this story begins.

An anime adaptation produced by MAPPA in cooperation with Crunchyroll began July 2020.