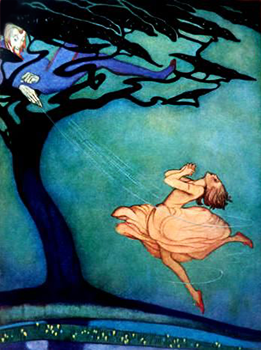 A condition where a dancing person must continue to dance and has no way to stop moving. In some cases the victims begin to dance voluntarily but find themselves unable to stop; in others, they were forced to dance against their will. In both cases, the victim is at the mercy of someone or something else (a villain, a curse, an artifact, or similar) that compels this dancing. If an object or trinket controls the dancing, they may be freed if they can get rid of it, but sometimes it's not so easily shaken, and other times even that won't help.

The victims may be forced to dance for the following purposes:

Can be a form of Ironic Hell or Laser-Guided Karma (to say nothing of Cool and Unusual Punishment). Relatively popular in children's entertainment because it seems like a relatively harmless means of restraint, comparable to Tickle Torture. Mind-Control Music often, and The Music Meister always, causes this trope.

Often a version of People Puppets, and overlaps with Mind Manipulation. Not to be confused with Bullet Dancing (a series of reflex leaps isn't quite what this trope is after).

His primary attack on civilian victims is to make them dance against their will to his rock tunes.

His primary attack on civilian victims is to make them dance against their will to his rock tunes.