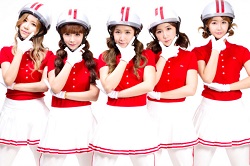 Crayon Pop is a 4-member Korean Pop band founded in 2012 (initially known as Hurricane Pop) and went on indefinite hiatus in 2017. In the beginning, they found little success in their native Korea, but they were mildly popular in Japan. Their fortunes changed when they released "Bar Bar Bar" in the summer of 2013. At first, the song looked like it was destined for another lukewarm reception, but almost a month after it came out, the song went viral. It would go on to become their first and so far only chart-topping single. In addition to their fame in Korea, they also gained enough attention in America to be selected as Lady Gaga's opening act for some dates of her "Art Pop" tour in June/July of 2014.

Since the summer of 2014, the group has yet to return to the heights of fame they achieved with "Bar Bar Bar." However, they have remained active, releasing new material for both the Korean and Japanese markets. Lately, the group made headlines when Soyul was announced to be engaged to Moon Hee Jun of veteran male group H.O.T, and they were married in February.

In April of 2017, it was revealed the group's contracts with Chrome Media had expired in March of that year and the girls had gone their separate ways, although the group said they didn't consider this an official disbandment and hoped that they would one day get back together as five to release more music (Chrome Media has since announced that Way's contract ends in May, not March as they initially claimed). Choa and Way are looking to get into new agencies, Ellin and Gummi are "preparing for new activities." The group became a quartet on May 31st, 2017, when it was announced that Soyul will be leaving the group due to her marriage to Moon Hee Jun, as well as the arrival of their newborn baby girl.