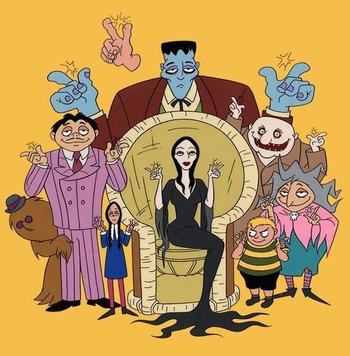 Just as creepy and kooky, but much more two-dimensional.
The second animated series based on The Addams Family that was produced by Hanna-Barbera, which aired in 1992 on ABC in the wake of the recent live-action movie. It was more similar to the 1960s live-action sitcom, mainly taking place in the Addams' big mansion, and featuring original Gomez John Astin returning to his role. Unlike the 1973 series, this iteration also used the classic theme song. The show was later rerun on Cartoon Network and Boomerang.
Advertisement: